(Reuters) - The Supreme Court will hear arguments on Tuesday in a case that could decide whether generic drugmakers can be held liable for alleged flaws in the designs of their medications, even though federal law requires generic manufacturers to copy the brand drugmaker's design.

The case, closely watched by pharmaceutical companies, regulators and lawyers, could determine the extent to which individuals can hold generic drug manufacturers liable for injuries allegedly caused by their copycat products.

Mutual Pharmaceutical Co has asked the high court to overturn a jury award to Karen Bartlett, a New Hampshire woman who took Mutual's generic non-steroidal anti-inflammatory drug, sulindac, in 2004 after her doctor prescribed it for shoulder pain.

Mutual, based in Philadelphia, is a unit of URL Pharma, owned by Sun Pharmaceutical Industries, and manufactures dozens of generic drugs ranging from antibiotic doxycycline to the antifungal nystatin.

Doctors diagnosed a rare hypersensitivity reaction associated with the drug that developed three weeks after Bartlett started taking it. Her skin began to peel off, leaving her with burn-like lesions over two-thirds of her body. She spent close to two months in a hospital burn unit, some of that time in a medically induced coma, and has since undergone 13 eye surgeries.

The reaction, a severe form of Stevens-Johnson Syndrome, left Bartlett with permanent near-blindness, scarred lungs and a constricted esophagus that makes it difficult to swallow. She sued Mutual in 2008 for alleged design defects under New Hampshire law.

After a 14-day trial, a jury awarded Bartlett for her injuries.

Asking the Supreme Court to overturn the award, Mutual argues that federal law bars such claims because its drug had already been approved by the U.S. Food and Drug Administration and federal law requires generic drugs to have the same design as their brand-name equivalents.

The company cites a 2011 Supreme Court ruling, PLIVA v. Mensing, which dramatically constrained consumers' ability to sue generic manufacturers over alleged injuries. In that case, the court found that generic drugmakers could not be sued for failing to warn about certain health risks because federal law requires brand-name and generic drugs to carry the same label. That ruling has wiped out the bulk of personal injury cases against generic manufacturers.

Bartlett's case skirted the Mensing ruling by claiming that the generic drug was inherently dangerous, based on the number of incident reports of the skin reaction submitted to the FDA. From that data, Bartlett concluded that sulindac's design was unreasonably dangerous and defective.

Mutual argues that the logic of Mensing should also apply to design defect claims because, as with their labels, generic drug companies have no control over their product's design, which has to mimic the brand-name counterpart.

But in May a unanimous three-judge panel of the 1st Circuit Court of Appeals in Boston refused to extend the ruling to design defect claims. The court ruled that Mutual could simply have decided to stop making sulindac, based on the brand name Clinoril, and take it off the shelves.

If the Supreme Court finds that the product defect claims under state law are barred by federal law, it would become virtually impossible to hold a generic drugmaker accountable for injuries caused by their products.

About 80 percent of all U.S. prescriptions are filled with generics, according to healthcare information provider IMS Health. When a doctor prescribes a brand-name drug, state laws allow pharmacists to automatically substitute the cheaper generic version in filling the prescription. Bartlett's doctor prescribed the brand-name Clinoril, and her pharmacist filled it with the generic sulindac. 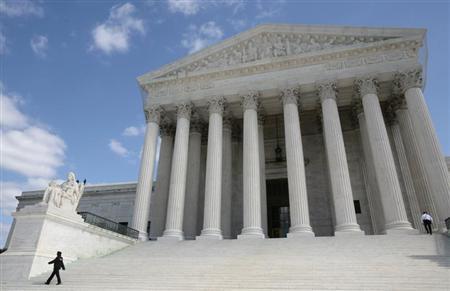 Most people are unaware they're taking a generic instead of the brand-name drug, said Richard Schulte, a lawyer who represents plaintiffs in personal injury suits against generic drug companies.

"When they pick up their script, they have no idea they have no legal claim and they're not protected," Schulte said.

Bartlett's lawyer, Keith Jensen, said that even though the FDA is responsible for approving all drugs, the agency is too ill-equipped and underfunded to ensure that drugs are safe and effective. Lawsuits like Bartlett's are crucial for exposing safety problems with drugs, he said.

When Bartlett took the drug, sulindac's label included a warning that it was associated with the rare but potentially fatal skin reaction. In 2005, Mutual strengthened its warning after the FDA recommended that all manufacturers of non-steroidal anti-inflammatories, or NSAIDs, include a description of the early symptoms of the skin reaction in the label. That year the FDA also asked Pfizer to withdraw its drug Bextra after reports of the reaction, but it allowed other NSAIDs to remain on the market.

Mutual's lawyer, Jay Lefkowitz, declined to comment on the case. URL Pharma and Sun Pharmaceutical Industries did not immediately respond to requests for comment.

"There is no question that the results were horrific," Mutual said in its brief, noting that Bartlett can no longer eat normally, have sexual relations, read, drive or work.

But the company said Congress created a regulatory framework that allows generic drugs to piggyback on the brand-name drugs in order to keep generic prices down. To gain FDA approval, generic drugmakers have to show only that their product matches the brand drug, without having to conduct expensive clinical studies.

"It is the special, and different, regulation of generic drugs that allowed the generic drug market to expand, bringing more drugs more quickly and cheaply to the public," the company said in its brief, quoting the Mensing decision.

In the Mensing case, the Supreme Court was divided 5-4, with Justice Clarence Thomas delivering the majority opinion. The case came down along predictable lines, with swing justice Anthony Kennedy joining the court's conservative camp to form a majority. A majority could again find that Bartlett's suit conflicts with federal law, said lawyers for pharmaceutical companies.

The Solicitor General, which filed an amicus brief and will argue on behalf of the FDA on Tuesday, says the agency conducts a rigorous scientific evaluation to determine whether a drug's benefits outweigh its risks. Juries should not be able to second-guess those decisions, the FDA maintains, and generic pharmaceutical companies agree.

"If jurors with no technical expertise can decide healthcare matters like what is medically safe for patients, the result will be an unpredictable flow of needed medicines, which is a major problem for patients," said the industry trade group, the Generic Pharmaceutical Association.

Bartlett said she is planning to attend Tuesday's oral arguments.