The Supreme Court hears arguments on whether Americans who are hurt by generic drugs can hold the drug maker liable for their injuries.

She endured burns across much of her body, spent two months in a medically induced coma and underwent 12 eye surgeries. She is now nearly blind and unable to eat normally because of burns to her throat.

She was at the Supreme Court on Tuesday to hear arguments on whether Americans who are hurt by generic drugs can ever hold the drug maker liable for their injuries.

Nearly 80% of prescriptions that Americans now fill are for generic drugs, and the high court finds itself at a crossroads on how to resolve claims from patients who are badly injured by these copycat products.

Should patients have a right to take their cases to a jury and seek damages? Or should the court block all such claims on the grounds that federal regulators already decided the drug was safe for sale?

Two years ago, the court handed down a 5-4 decision that shielded generic drug makers from being held liable for failing to warn patients of harmful side effects.

The court's conservative majority reasoned that since the makers of these copycat drugs must use the same warning label that was approved by the U.S. Food & Drug Administration for the original maker, they cannot be faulted for not including stronger warnings. 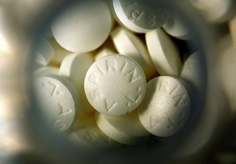 The case of Mutual Pharmaceutical Co. Inc. vs. Bartlett, however, will decide whether a patient can sue a generic drug maker for selling an unreasonably dangerous drug, regardless of warnings.

A jury awarded Bartlett $21 million in a verdict against Mutual Pharmaceutical, the maker of the generic sulindac, but the high court agreed to consider throwing out the verdict.

Sulindac is a non-steroidal anti-inflammatory drug that was first sold under the brand Clinoril. Bartlett suffered a very rare but serious reaction, a form of Stevens-Johnson Syndrome.

The justices have been skeptical of allowing juries to "second guess" the safety of drugs that have been approved for sale by federal regulators.

In oral arguments Tuesday, Justices Antonin Scalia and Stephen Breyer questioned whether juries of ordinary citizens are qualified to decide whether a drug's benefits outweigh its risks.

A lawyer for the drug maker and one for the Obama administration urged the court to throw out the verdict and rule that juries cannot decide an approved drug is too dangerous to be on the market.

But Justices Sonia Sotomayor and Elena Kagan appeared to disagree. They suggested the FDA'sapproval of a drug meant only that it could be sold. It did not necessarily prevent a jury from finding it was unreasonably dangerous, they said.

Washington attorney David Frederick, representing Bartlett, said his client did not seek medication for a serious condition or disease like cancer. She had shoulder pain, but she was prescribed a drug that had a higher than normal rate of causing severe side effects.

"Aspirin and acetaminophen — Tylenol — produce the same kind of pain relief, but they do not produce the kind of [injuries] that Ms. Bartlett had, that caused 60% of her body to burn," he said.

The court is likely to issue a decision in June.